The polls continue to show the surge in Lib Dem support is holding, with the Tory lead continuing to be extremely narrow. The possibility of a hung parliament is very real, with only eight days until the country goes to the polls.
Nick Clegg, the man of the moment, has been giving conflicting views on which party the Lib Dems would be most likely to support. Clegg has already questioned the constitutional convention of the PM being offered the first chance to form government, despite the possibility that Labour could finish third in the polls. Meanwhile, the Tories are campaigning hard for a majority government, their latest PEB directly attacks the possibility of a hung parliament. And with some polls showing the best improvement in their share of the vote since the first leader’s debate earlier this month, it may be working. 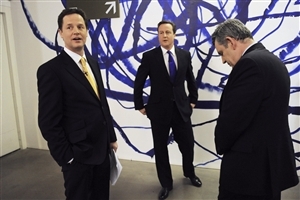 All three parties have come under pressure to clarify where they would make cuts in public spending, following an IFS report criticising the gaping holes in their manifesto figures – this is unlikely to change, with just over a week to go none of the parties will be keen to forensically setting out there cuts plan.Next Thursday’s leaders debate which focuses on Gordon Brown’s strong point, the economy, this set piece could inject more volatility into the polls and perhaps even decide the election. In short there is still everything to play for in this election, which will go down in history, not only for setting a precedent with the televised debates, but also for being the tightest election in a generation.

Posted by PSA Communications at 11:29 No comments:

As widely predicted, Nick Clegg gained the most from last night’s historic leader’s debate. David Cameron failed to live up to expectations, and looked rigid throughout, playing it safe perhaps. Gordon Brown delivered his usual recognisable performance, handling the intensity of the ninety minutes better than many commnetators had expected.
Despite viewing figures being lower than expected, peaking at 9.9 million, many people will have been hearing and seeing Nick Clegg for the first time, in this respect he could not fail to impress – I supect he looked different and dare I say it refreshing to electorate. 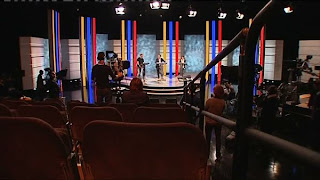 Now before rushing to the conclusion that the two party system is dead, it is crucial to note that the instant polling which gave Clegg a vote of confidence is highly unlikely to transfer across to the national polls. Much to the dismay of the Lib Dems, I suspect.
If the TV debates, and it’s a big if, lead to an increased Lib Dem share of the vote it may be Labour who stand to lose the most. Paradoxically, a surge in Lib Dem votes may increase a Tory majority and ensure a Lib/Lab coalition is resigned to the political dustbin.


As expected the Prime Minster today asked the Queen to dissolve parliament for a May 6 Election, Parliament will continue as normal today, followed by the “wash up" process which will allow the parties to horse trade on legislation that has made it through one chamber of Parliament and reached second reading in the other. 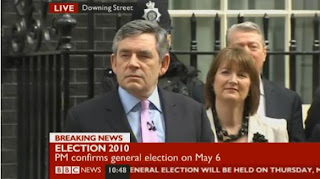 Bills that are eligible for “wash up” include:
In what promises to be the most exciting general election for a generation, all three party leaders outlined their campaign platforms amidst this morning's media hysteria. The PM outlined “three big challenges" facing the country - securing the recovery, protecting front-line services whilst halving the deficit, and renewing politics. David Cameron launched his Party’s campaign by saying he is fighting for "the great ignored".  Liberal Democrat Leader Nick Clegg will launch his campaign in the three-way marginal constituency of Watford.
Dates have now been confirmed for Prime Ministerial TV debates - 15th (ITV, Manchester), 22nd (Sky, Bristol) and 29th (BBC, Birmingham) - These could prove to be game changers.
With the election called, 'purdah' has now commenced, meaning that government continues to operate but cannot make any major policy announcements.
It has also been announced Parliament won't return until May 18th after the election, this is slightly longer than usual, a reflection of the real possibility of a hung Parliament. The election of the Speaker will take place first, along with the swearing-in of the members of parliament. The Queen's Speech will take place the following week and it is expected that this will occur on Wednesday May 26.
Posted by PSA Communications at 12:03 No comments: