Forces of hell unleashed at PMQs

It’s been an interesting week for the PM, with Andrew Rawnsley’s much hyped book serialisation providing snippets of life in No.10 based on "24 carat" sources; the furore that has followed has been rather surprising.
Helped by the PR disaster that is Christine Pratt who went on a media blitz earlier this week in a clear attempt to promote her now ailing charity, by claiming there has been complaints about bullying from inside No.10 (Helpfully, Taiwanese media have made a CGI reconstruction, which is fast becoming a viral hit). 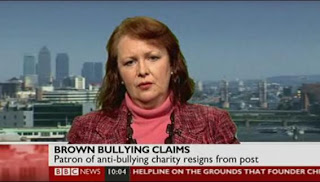 Fast forward through the media frenzy and we arrive at today, with the election getting closer by the minute, what effect has the bully allegations had on the PM. In short the impact has been minimal, Labour have continued to narrow the Tory lead with today’s Sun/You Gov suggesting the Tories have a mere six point lead. Hung parliament anyone?
Alastair Darling’s revelation that he had the ‘forces of hell’ directed at him by No.10, in the now infamous disagreement he had with the PM over his recession predictions – which turned out to be accurate – provided Cameron with plenty of ammunition for today’s PMQs.
Leading with the failings in Stafford Hospital, it did not take long for Cameron to claim that openness was not only needed in the NHS but also at the heart of government. His remaining questions concentrated on the briefing against the Chancellor. A notably calm Brown denied and praised Alastair Darling.
Clegg did quite well today recognising that the ‘new’ Labour  election slogan is actually a recycled one, "Last time PM wheeled out Future Fair For All was in 2003. The gap in tax between rich and poor has doubled - hardly fair." He continued, “A Future Fair For All, is not a slogan it’s a warning”
One of more humorous moments of the session came from Mr Speaker, "If the House does not quiet down I will have to ring a helpline myself". Overall, a fiery session which the PM seemed to handle well and eventually win.
Posted by PSA Communications at 12:34 No comments:

A week is a long time in the polls

Labour’s recent gain in the polls, with the previous five polls showing the gap between Labour and the Tories fluctuating between 7 and 9 points, illustrates just how tight the next general will be and is leading some commentators to the conclusion that there will be a hung parliament at the next general election.
Despite this, Cameron regained his confidence at PMQs this week, after a difficult month of policy wobbles, by panning Brown’s attempt to reform the electoral system, claiming that he had thirteen years to do so – he had a point. In what is being seen as a brazen attempt to court the Lib Dems and nurture the idea of a coalition ahead of the General Election, MPs will vote on AV replacing the first past the post system next week. With many Labour MPs already voicing disapproval, all eyes will be on the must win vote for Brown.
The PM has said he is very angry after it was announced that four MPs will face criminal charges (under section 17 of the Theft Act 1968 for false accounting) over their expenses claims; a further case is still under investigation. Elliot Chaytor, Jim Devine, David Chaytor and Lord Hanningfield are the accused, the three MPs released a joint statement this morning utterly refuting the charges brought against them. This is undoubtedly an embarrassment for Labour and it will be interesting to see how damaging this will be on their polling.
On the positive side, the historic breakthrough in Northern Ireland, may provide a boost for Labour. On top of that, rumours of Tony Blair hitting the campaign trail for Labour are actually true, in an interview with the Evening Standard, the PM said, “I think you will find Tony Blair has a role. I think you will find that many people in Labour who are no longer in Government but who have been part of the ‘project’ for years will have a role. Tony will have to explain, when he wishes, what he can do.” Also on the horizon for the PM is the broadcast of an one hour interview with Piers Morgan, this cosy interview should help maintain if not improve the recent gains.
Posted by PSA Communications at 15:28 No comments: