Yesterday the PM followed the historic Speaker’s resignation with a press conference outlining the changes that the party leaders have agreed on. The PM performed well and stated that Westminster cannot operate like a “gentleman’s club”. He continued to state that self regulation was no longer an option and independent body will be set up to regulate expenses and remuneration. The PM stated, Westminster "can no longer operate as a 19th-century institution where the members make up the rules, and operate them among themselves".

The government have now launched a consultative document outlining the unprecedented changes to the parliamentary system. In marked change of strategy, Brown is now on the offensive keen to show the public that he is leading the drive to transparency and fairness in parliament. 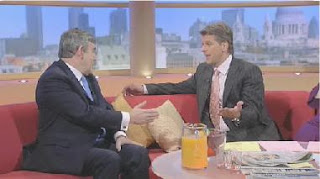 On GMTV this morning, the PM attacked Hazel Blears by stating her behaviour was “totally unacceptable” and reiterated that any MP or minster that has defied the expenses rules will not stand for the Labour party in the next general election. With a reshuffle expected shortly after the European elections on June 4, it seems Blear’s exit from government could be imminent. When questioned about the possibility of a general election, the PM stated that country did not need the “chaos” of an election at this time.

PMQs were dominated by calls for an immediate general election, with Cameron asking “The Prime Minister calls an election chaos. I call it change. When can we have one?" In a much fierier exchange, the PM stated a Conservative government would cause chaos. Nick Clegg performed well again; he also called for an election, whilst advocating wider parliamentary reforms including a new electoral system, he claimed, “expenses are only the tip of the ice berg”. And continued, "the whole way we do politics must now be transformed".

Posted by PSA Communications at 16:05 No comments: 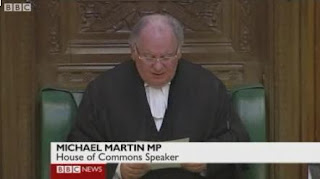 Breaking an over 300 year old tradition, MPs have effectively ousted Michael Martin as the Speaker of the House of Commons yesterday. In an extremely brief statement, Martin declared that he would relinquish his post on 21June, with a vote for his successor taking place the following day.

The expenses scandal continues to rock the foundations of the Commons with all party leaders encouraging deselection of rule breaking MPs, ahead of the next general election. All eyes now turn to a likely successor for the role of speaker. Clearly the new speaker will need to advocate a reformist agenda and shake up the current expenses system to restore public’s faith not only in parliament but democracy itself.

Thankfully for the government, column inches look likely to be taken up by this historic resignation for the rest of the week with speculation over who is best suited to lead the house on a reformist agenda. Ladbrokes now have Sir George Young as 5/2 favourite and amusingly they have Gordon Brown on 250/1 – perhaps worth a punt?

Posted by PSA Communications at 09:33 No comments: