There's nothing special about the first 100 days of any new Government except that everyone marks it as an important milestone.  Rarely will the Government's most important actions have been completed in this arbitrary time period.  Rarely will historians look back and say, "that first 100 days set the tone for the whole administration".  Nevertheless, first impressions matter and the "Big Mo" - momentum - is key to political success.


So, has anything momentous actually happened?


The speed the new Government has set to work has been astonishing, many predicted the very nature of coalition arrangements would make for cumbersome and piecemeal policy advances, oh how wrong they were. The deficit reduction narrative has of course allowed for such swift action, government departments have been falling over themselves to slash costs, Quangos have been heavily culled, crowd sourcing has been used like never before, a raft of information on public spending has been made public. This gives only a flavour of what the coalition has achieved in its first 100 days and interestingly public support is holding. 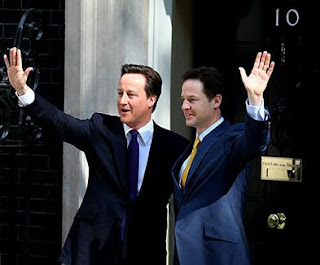 However, the polls do suggest that the Liberal Democrats are not faring well, Nick Clegg is at pains to remind us that his party should be judged over five years and not 100 days. He will be hoping for a much needed boost in the approval ratings in what is sure to be a carefully managed series of Autumn conference policy announcements. But perhaps Nick Clegg does deserve a little early credit, given that he has managed to steer his party relatively well thus far, there has been little in the way of backbench grumbling and the idea of rebellion seems a distant one at present. Nevertheless, the Lib Dems have a serious image problem and one in which they will ultimately need their coalition partner's assistance to resolve.


It seems the public are offering David Cameron full credit for the efficient running of the Coalition Government. His personal approval rating and that of his party are high, rebellion again seems distant and despite some backbench disgruntlement over former Labour ministers being appointed to Government roles, it seems his ship is also steady and on course. It would be silly, not to question the durability of the coalition at this stage, whilst the majority of public affairs professionals who took part in a recent poll suggested that the coalition had a lifespan of two years. I'm willing to bet that the coalition will continue as is, until the fifth year when inevitably the seams will begin to fray beyond repair. Until that point, expect the brisk pace of legislative reform to continue.


Overall, the first 100 days can be viewed as a success, the way in which the coalition partners have gelled has been and continues to be remarkable. The idea of such a strong coalition during the election campaign was unfathomable.
Posted by PSA Communications at 17:20 No comments: