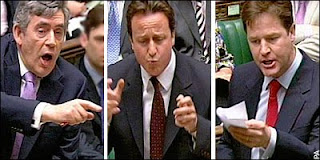 No timely interruptions to steal the media limelight this week, thankfully for the PM.


The session kicked off with a change of strategy for Cameron, taking his questions in two segments rather than usual six question spurt. It worked slightly better, landing some blows on the PM mainly in regards to last week’s coup attempt. In a classic piece of middle England electioneering, Cameron claimed that lessons needed to be learnt from the how the adverse weather has been handled, specifically grit shortages.


However, the PM was on buoyant form and used all his replies to taunt Cameron over his airbrushed campaign poster and bemoaned Cameron’s lack of policy, "He can have his posters we will have the policies" the PM quipped.


Nick Clegg led with Iraq and called for the PM to do the "decent thing" and volunteer to appear before the Iraq inquiry before a general election, the PM rebuffed with ease by stating the Inquiry would make such decisions.


Overall, not a bad session for the PM, who seemed determined to prove his doubters wrong. Cameron’s sound bites on the economy and “call an election now” are starting to become tiresome and perhaps a new line of attack would prove more effective.

Posted by PSA Communications at 14:23 No comments:

The Return of the Blairites....


"As we move towards a General Election it remains the case that the Parliamentary Labour Party is deeply divided over the question of the leadership. Many colleagues have expressed their frustration at the way in which this question is affecting our political performance. We have therefore come to the conclusion that the only way to resolve this issue would be to allow every member to express their view in a secret ballot."


The coup has thus far attracted the support of the usual suspects; Charles Clarke, Frank Field, Barry Sheerman etc. Crucially, there seems to be no cabinet support and this challenge like the previous two looks set to collapse. To the despair of No.10 this will overshadow Brown's strong performance in PMQs today and will fuel Tory calls for an early election.

Posted by PSA Communications at 14:15 No comments:

Has the General Election already been won?

With the general election expected within the next six months (most likely on May 6th), both parties were keen to steal the New Year limelight. The Tories were first to break out of political hibernation. Launching their draft health manifesto and their leader in a Presidential style, see poster below. 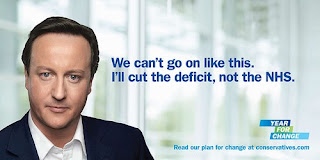 As has now been well reported, Labour responded with a dossier on Tory spending plans, in which they claimed to expose a £34 billion black hole. The battle has clearly begun. It looks like Labour has secured their first mini blow of this election saga, with the Tories appearing to back down on their marriage tax break proposal.


However, is all this campaigning actually going to make a difference to the election result, I think not. There will be a Conservative Government running the country before mid-June, say most opinion polls and many political commentators. This suggests voters have already decided who they are going to vote for and thus the months of campaigning ahead will simply act as background noise.


That said, there are two important caveats to add: Firstly, whilst a Tory government is looking likely, anything is possible, as the overused Macmillan quote “events, dear boy event” reminds us. Secondly, Cameron still has some way to go in conveying what he and his party stand for, to attract floating voters, given the size of the swing required for a workable majority. For a majority of one the Tories must gain 117 seats, a swing not seen since 1931.

Posted by PSA Communications at 14:44 No comments: