Red Ed needs the speech of his life to survive today

IT IS RARE that a party leader of just twelve months standing is faced with making a speech that is considered to be make-or-break for his future prospects. But that is exactly the position facing Ed Miliband as he delivers his Labour conference speech in Liverpool today.


A strong summer performance on phone hacking cannot mask a string of polls where he consistently trails David Cameron by 10 to 20 per cent in respect of perceived leadership capabilities. That the Labour Party is marginally ahead in most polls of voting intentions suggests its slender lead exists despite Miliband, not because of him.

The root of Miliband’s difficulties is of course the £156bn UK government borrowing in 2009/10. Even if the public were in the mood to forgive and forget such a large deficit (which they are not), Miliband and his shadow chancellor Ed Balls have struggled to articulate how they would tackle the current financial crisis if they were in power. So while borrowing remains extremely high this year, a double dip recession is a strong possibility, and public spending cuts remain deeply unpopular, Miliband has been unable to capitalise on the coalition’s woes.
Miliband’s other major problem is, Miliband. So far as they are aware of him, significant numbers of respondents to opinion polls just do not warm to him and cannot envisage him in 10 Downing Street. Words like “nerdy” and “geeky” tend to emerge quite quickly. To many, he simply does not have the communication skills of David Cameron, the kind you need to be a Prime Minister.
So today in Liverpool Miliband will seek to build his reputation as competent, likeable and trustworthy. His pitch is to middle England – particularly voters in the south and the Midlands who have deserted Labour in droves. He understands that economic insecurity is a major concern for the British people, hence his repeated references to the “squeezed middle”.
A senior Labour figure said at the weekend “we don’t need to shout louder, but explain more. Explain what we got right and wrong before the crash, explain how we would get the economy growing and so deal with the deficit, and explain how we will deal with social justice with less money around”. No doubt this is true, but it is highly unlikely that Miliband will be able to tick all those boxes in one go. His speech today will not set out the manifesto that Labour intends to fight the next election upon, although there may be some eye-catching policies on energy and higher education. Overall, his task is to try to convince a sceptical public that he shares their worries and has credible ideas to do something about them.
If Miliband can do this, perhaps he can move to the foothills of the mountain he has to climb between now and May 2015. But he will have to make quick and steady progress if he is to prevent a pearl-handled revolver being passed his way.
Phillip Snape is the managing director of PSA Communications.
This article first appeared in City Am 25.09.11
Posted by PSA Communications at 09:54 No comments:

With the end of the Liberal Democrat conference fast approaching and before we all pack our bags and head to Liverpool we should reflect on what we have learned about the Coalition junior partners this week.

This conference has by in large been a disciplined and convivial affair, with no significant upsets on the floor of the conference hall. 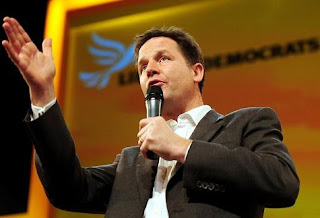 Nick Clegg told delegates to hold their heads high, be proud of what they have achieved in government and don’t look back. Looking back would only remind the Lib Dems that their share of the vote has halved and not so long ago students were burning effigies of their dear leader. The clear message was: hold your nerve things will get better.

Compared with last year, when the conference language was all about unity and stable government in the national interest, this year there has been a war of words against their Tory partners which has dominated speeches all week. With Chris Huhne branding Tory right wingers as Britain’s "Tea Party tendency". Party President Tim Farron said the Coalition must end in “divorce”. And of course Vince Cable had to get involved, by claiming Tories were "descendants of those who sent children up chimneys".

On the policy announcement front, there have been announcements on the clamping down of executive pay, a new tax inspector team to target the rich and firm commitment to the 50p tax remaining in absence of another tax on the wealthy.

In keeping with the theme of the conference there will be no great surprises in Clegg’s closing speech, he will reiterate the Coalition’s commitment to reducing the deficit whilst claiming the Government is doing everything in its power to kick-start sluggish growth.

Overall, a rather dull conference with no particular highlights. The Tories couldn’t have scripted it better themselves.
Posted by PSA Communications at 11:37 No comments:

The much heralded report on banking regulation from Sir John Vickers has finally been delivered. It signals the biggest shake up of the City of London since the 1980s – but not just yet. Vickers recommends that banks should separate their retail and investment operations and have sufficient capital to be able to fund their frequent trips to the casino. Vickers acknowledges that the proposals are complex and far reaching so has come to the rescue of the Chancellor by giving him seven years to implement them. Everyone is apparently on board – the banks have barely murmured. Job done? Not quite.

The politics of this – past and present – are fascinating. In 2008 as the banks haemorrhaged, the British taxpayer was forced to ride to their rescue. On one particular day the public went about their business blissfully unaware that their local hole in the wall was just 24 hours away from running out of cash. Not unusual? Well in this case it was as the banks literally had no banknotes left to fill them up with. Billions were pumped in to keep the banks afloat on the basis that it would be unthinkable for one of them to go under. By 2010 the Treasury was empty and as it happened under Labour’s watch they paid the price at the election.

Some might argue that the most incredible outcome of all of this was Ed Balls issuing a mea culpa for his involvement in a government that presided over such a light touch regulatory regime. It does remind us however, that virtually all politicians (with the honourable exception of the recently beatified St Vincent of Twickenham) were trying to outdo each other in arguing for less regulation not more, something that has conveniently been banished from the memory of the Chancellor.

All of this has demonstrated in graphic detail just how few friends the banks have. One wonders what they and their associations have been doing for the last few years if they cannot get even the right wing of the Tory party to defend them. Even the usual anti-regulation rhetoric has been shoved to one side by a government keen to begin a process that will end with massive regulatory intervention on the banks.

There is a lot of water to flow under the bridge before 2019. Ed Miliband is talking about Vickers being the “first stage of reform” not the end. No doubt his advisors will be working on a number of cruel and unusual punishments to inflict on bankers in the hope that Labour can draw favour from the public.

The Chancellor has said that the proposals will require primary legislation. He will want this to be a post 2015 election legislative battle which gives all parties concerned plenty of time to sharpen their knives. The banks themselves now have adequate time to get into the meat of this argument and achieve, in the circumstances, the best outcomes in what will be a complex and technical area of policy development. If they are wise they will approach this gargantuan project with a little more humility than they have in the past.
Posted by PSA Communications at 11:06 No comments:

In his usual uncompromising style Simon Jenkins suggested recently that lobbyists (a term he uses very loosely) are enjoying a fine old time under the coalition government. His argument is that the very nature of coalition politics makes it easier for special interest groups to play one part of the government off against another. To back his assertion he cites recent policy u-turns (forestry, NHS, housing) or continued concessions to big spending lobbies (high speed rail, Olympics, renewable energy) as examples of how organised groups can manipulate naive and risk averse coalition ministers.

I agree with this. A well constructed, strategically communicated argument has more chance of progressing under a two-party coalition than it would under a government with a thumping majority. If Margaret Thatcher or Tony Blair did not want to listen, then there was little one could do to change that. The situation is very different now with two parties in government whose core philosophies are so diametrically opposed, it is easier to identify and tap into a vein of political support somewhere within the coalition.

However, a major constraint for lobby groups is the fact that the government has no money to fund new and interesting policy ideas. This was not a problem before 2010 when the Labour government seemingly put money into every idea it was presented with, no matter how barmy. Lobbyists now have to be far more creative - proposing policy solutions that do not have price tags attached to them.

Where I differ with Jenkins is his implication that all lobbying is somehow bad; Ministers should be their own masters - piloting the direction of policy, able to swat away the irritating special interest groups that are currently so effective at forcing a change of course. On the contrary I see "lobbying" - again in the widest sense - as a fundamental right in a democratic society. Indeed we would be all the poorer if Minister's ploughed on regardless of outside voices - Poll Tax anyone?

This article first appeared in PR week 02.09.11
Posted by PSA Communications at 11:42 No comments:

Posted by PSA Communications at 11:27 No comments: