PMQs dominated by Gurkhas’ right to stay in Britain 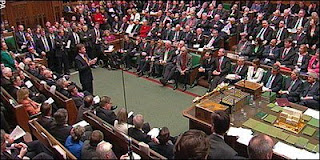 PMQs were a rather subdued affair today, the first round of questions posed by Cameron focused on swine flu, with PM revealing that three new cases had been identified and all three had recently travelled to Mexico. He also stated that Health Secretary would be making another statement on the issue later today as well as detailing some of the provisions the government is making to prevent a wider outbreak in the country.

The issue of expenses was mentioned briefly, but the issue of Gurkha settlement rights was raised repeatedly by both sides of the House. It looked as if Cameron stole some Clegg’s thunder by raising the issue first, in the knowledge that the Lib Dems have tabled a debate today to keep the issue on the government’s agenda.

However, Cameron’s attempt to thunder steal failed, Nick Clegg performed unusually well today and pulled no punches; he claimed the PM’s answers on the Gurkha issue were “deeply evasive” and “shameful”. The PM did state that ministers would be reviewing the situation, in attempt to appease a widely popular cause.

The PM showed the House of Commons, that he was a creature of habit today by swiftly making an exit from the dispatch box, before realising he had scheduled a statement on Afghanistan and Pakistan, the result was wild howls of laughter from the Conservative benches.


Posted by PSA Communications at 14:12 No comments: 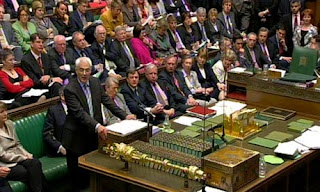 Alastair Darling today outlined his budget to get Britain out of recession quickly, stating “you can grow your way out of a recession; you can’t cut your way out of it.” The headline grabbing measure of this budget was an increase of the tax threshold for Britain’s top earners to 50%, to be introduced next year, forcing the Tories to adopt or scrap what will probably be a popular measure.

A small life line was thrown to struggling businesses - they will be able to reclaim taxes on profits paid in the last three years until November 2010. The Chancellor also announced a new £750m strategic investment fund to help emerging technologies and regionally important sectors. The budget also included a financial boost to low carbon industries, and a range of measures aimed at getting the unemployed back into work.

Reacting to the budget David Cameron stated, "Today everyone can see what an utter mess this Labour government and this Labour Prime Minister have made of the British economy - the fastest rise in unemployment in our history the worst recessions since world war two and the worst peace time public finances ever known,"

Nick Clegg described the Budget as “a mishmash of recycled announcements from a government skilled in raising false hopes, but incapable of delivering practical help”. He went onto criticise the planned income tax increase for high-earners as "tokenistic" and unlikely to raise significant sums of money.

The effect of today’s announcements on the economy remains to be seen, that said the FTSE fell dramatically during the chancellor’s statement only to rally by over 30 points by the finish. Without doubt the health of the of our public finances and severity of government debt is causing concern in the city, especially as today’s budget detailed a required increase of £70 billion in government bond sales.

Richard Lambert, CBI Director-General, said: The key question for this Budget was whether it set out a credible and rigorous path for restoring the public finances to health. The CBI’s preliminary judgement must be that it does not.

· Chancellor confirmed his view that he expects economic recovery to start this year.

· Inflation target remains unchanged at 2%; forecast is that it will be 1% by the year end.

· Stamp Duty “holiday” extended until end of year for all houses costing up to £175,000

· The 5% reduced rate of VAT for children’s car seats will be extended to include bases for such seats, with effect from 1 July 2009.

· It has been confirmed that the “temporary” VAT reduction measure will end on 1 January 2010.

· Alcohol and tobacco duties up by 2% today; fuel duty to rise by 2p per litre from September.

Posted by PSA Communications at 16:40 No comments:

Conventional political wisdom seems to show that becoming Home Secretary can only end one way, badly. The role dictates that you are not only culpable for your own mistakes but due to the sensitivity of the role, everyone else’s too. One major blunder is all it takes before the media start behaving like a policeman at a G20 convention.

The recent controversies over Damien Green’s arrest, 2 expenses scandals, the Bob Quick blunder and police heavy handedness have lead to major calls for the Home Secretary’s head. The PM and his weakened team will be more than aware of the need to be seen to be regaining control of home affairs and Smith’s P45 must be close to hand.

That said, the sacking of Smith will invite questions over his judgement in appointing her to the role, criticism he can ill afford. With the local and EU elections looming, this is not a decision he will want to make.

Posted by PSA Communications at 16:11 No comments: 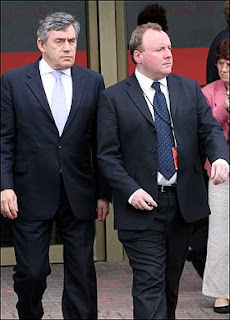 Gordon Brown is under pressure to publicly apologise again, this time not for his handling of the economy or the war in Iraq; instead it is the Damian McBride email scandal that is providing the latest thorn in his side. A speedy resignation from the No.10 strategist was classic damage limitation. However, this story looks set to run with Cameron reportedly furious about the exposé and demanding an apology from Brown.

The emails were sent to Derek Draper (ex Labour spin doctor) of Labour List fame, who has been spearheading Labour’s growing online presence, now John Prescott has called for his head on his blog, "I understand one man has left his job at No 10 – and quite rightly so. I believe Derek Draper should now follow him too."

The PM has written to the MPs concerned to offering regret over the incident, the PMs spokesman has stated that no public apology will be made. This could be yet another nail in Labour’s coffin, Brown’s reluctance to come out strong publicly against such behaviour will further alienate a large sway of already disaffected Labour party supporters.

In private, David Cameron will be thankful for such a juicy Easter gift, unfortunately for him there is no opportunity to harangue Brown in Parliament this week, though the media seem set to do that for him. Undoubtedly, the Labour spin machine is once again in a very public tangle, for the government that once stated they would be “whiter than white”, ‘smeargate’ may prove to be a stain that will not wash out.

The scandal also highlights the shift taking place in political media; the scandal was exposed by the prominent centre right blogger Guido Fawkes (then handed to a Sunday newspaper). Clearly the power of the political blogosphere is not akin to the ‘old media’ style of control employed by the government, instead a much more pragmatic and engaging strategy must be employed.

Posted by PSA Communications at 15:19 No comments: