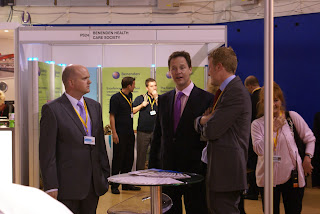 The conference season has begun, in what can only be described as a stormy week for the Liberal Democrats, often being credited as the party with confusing policies this conference did nothing to add clarity.
As many commentators have already pointed out, this did not feel like a pre general election conference, the atmosphere was subdued, there was bickering around policy and even leadership criticism. Have the Liberal Democrats missed their big moment?
Understandably there was infighting over the cornerstone policy of abolishing tuition fees morphing into an ‘aspiration’. Clegg’s call for ‘Savage cuts’ quickly became ‘progressive austerity’ and the Lib Dem’s biggest asset, Vince Cable, also took a dent receiving much criticism, for failing to adequately brief his shadow cabinet colleagues, on the underdeveloped proposals for a “mansion tax”. Party insiders claimed that the ‘open debate’ was at the core of the party’s policy creation, in attempt to downplay divisions.
In a marked departure from previous election strategy, Clegg has set his sights on discrediting the Tories, by referring to Cameron’s vision of change as ‘fake change’. It is clear that they have decided that Labour is a sinking ship and they must board Tory boats to be in with a chance at the next election. With this in mind, the general election may be ‘make or break’ for Clegg, if he fails to retain or improve upon the Lib Dem’s current 63 seats.
The closing speech by Nick Clegg needed to be good and it was, it had depth and was well delivered. It was an ambitious speech which even went as far as setting out his shadow cabinet, perhaps too ambitious with Ladbrokes currently offering odds of 150/1 for Clegg becoming PM at the next election.
PSA will be travelling to Brighton at the weekend, in what promises to be a difficult conference for Gordon Brown. With the Baroness Scotland affair continuing to rumble on, it seems his leadership will be under question once again.
Posted by PSA Communications at 11:58 No comments: