Cameron kicked off this week’s session with the government’s U-turn on TA funding, welcoming the decision, in a clear attempt to take the credit following his questioning last week. In a much more adversarial display than the last session, Cameron attacked the PMs dithering over the TA cuts and asked "Why does he keep getting it wrong?" 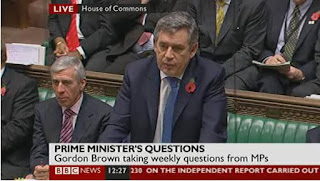 The focus then turned to the economy, in light of the recent GDP figures revealing that UK was still in recession, trailing other EU countries such as France and Germany. Cameron said that Britain is in the longest recession since records began. "This prime minister did not end boom and bust," he said to cheers from the Tory benches. The PM reiterated that the country would be out of recession by the end of the year, and lambasted the Tories for their judgements failures; he claimed there would be a "deeper and longer recession with more unemployment if we listened to them."... “They are not fit even to be the opposition."

Clegg raised the government’s commitment to climate change, claiming Brown had done "far too little, far too late" and attacking the role he played in Labour voting down the 10.10 campaign. The PM defended his green record by claiming the UK had met its Kyoto targets, and had been the first country to introduce climate change legislation.

Sir Stuart Bell raised the subject no one else dare, expenses, asking about the “next steps” after the Kelly report. The PM said he would await the report being published and implementation would be a matter for the independent parliamentary standards authority

Overall, a solid performance from the PM despite Cameron’s best efforts to undermine him, Brown was on angry form and this is often when he performs best. Clegg once again opted for a principled stance but failed to inflict any real damage on the PM.


Posted by PSA Communications at 14:00 No comments: 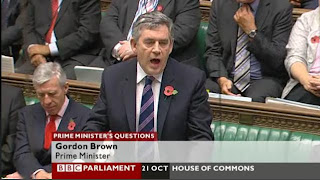 In a slightly more confrontational session than last week, Gordon Brown began by telling the house that he will publish his plans to deliver policing and justice to the Northern Ireland Assembly.

Cameron used all his questions to concentrate on the postal strike and asked the PM to condemn the strikes. The PM said he had already done so and urged negotiation between management and staff; he also called for ACAS to be brought in when appropriate.

Cameron continued by asking about the shelving of the Royal Mail privatisation bill, the PM claimed there was no buyer on the market. Cameron claimed that was simply not true and the real reason that it was shelved was due to backbench rebellion. He went onto to claim that union militancy had increased since the privatisation bill was shelved. He ended with "The way to stop this militancy is to show some leadership, some backbone, and some courage" The PM denied any link between privatisation and the strike, and rebuffed "This is nothing to do with the dispute at the moment. The dispute is about the 2007 modernisation plan."

Clegg focused on Banking and Mervyn King’s recent comments and stated that the "Banks are still a cartel," PM rebuffed and told him that he was wrong on the economy and claimed the banks were saved not for the bankers but for ordinary people.

Overall a strong performance from the PM, he appeared rattled by Cameron’s taunts. Speaking without notes he hammered home what he claimed were Tory judgement failures on the economy.

Posted by PSA Communications at 13:08 No comments:

The return of PMQs 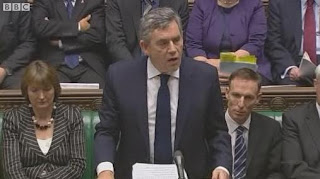 PMQs returns in a flurry of controversy after the twelve week summer recess. Once again expenses are back on the agenda; Sir Thomas Legg’s review has garnered much criticism from backbench MPs and put them at odds with the leadership of their parties.

However in a low key return, PMQs was dominated by Afghanistan with the PM listing the 37 military fatalities since July. David Cameron used his six questions to ask about adequate T.A training, and the quality of care for returning soldiers.

Nick Clegg used his two questions to raise concern over the legitimacy of the recent elections in Afghanistan, he claimed the elections were “flawed” and as a result the Afghan government lacks legitimacy. He suggested a national unity government should be formed. The PM said he will await the outcome of an investigation into the elections, and praised the fact that any election took place.

The legal injunction against the Guardian reporting a PQ from Paul Farrelly MP was also raised, by Conservative MP Peter Bottomley. The PM said that this was “an unfortunate area of law” and the Justice Secretary, Jack Straw, will investigate.

Overall a sombre session of PMQs lacking the usual volatility, interestingly there was no mention of expenses. As expected the PM today announced that British troop levels in Afghanistan will increase by 500, in a statement following PMQs, which brings the total number of troops in Afghanistan to 9,500.

Posted by PSA Communications at 13:41 No comments: