Final PMQs of the decade

The final PMQs of the year and the decade passed off in a rather bizarre and agreeable mood earlier today. Harriet Harman was in the driving seat for the government, as the PM is currently in Copenhagen for the climate change summit. 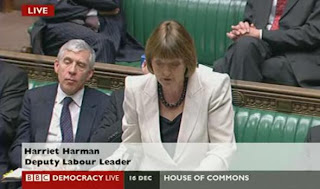 William Hague deputised for Cameron and failed to land any blows with his attacks on the Lizny arrest warrant, ineffective sanctions against Iran and the House rising early for Christmas. He also offered support for the climate change summit. Harman, whilst remaining in control also failed to impress today.


Vince Cable led with a question about tax evasion and asked for an ammendment to the Constitutional Reform Bill to ensure non-doms could not sit in parliament, citing Lord Ashcroft as an example. Harman agreed and said the government would bring forward legislation to deal with the issue. Overall an entirely forgettable session today.


This blog will return in the New Year, seasons greetings from PSA.

Posted by PSA Communications at 13:00 No comments:

The PBR as expected read like a manifesto, in an attempt to exploit perceived Conservative weaknesses on the economy. As expected the Chancellor outlined a super tax on bankers’ bonuses, he also decided to freeze inheritance tax allowance at £325,000 for the next year and outlined measures against offshore accounts.