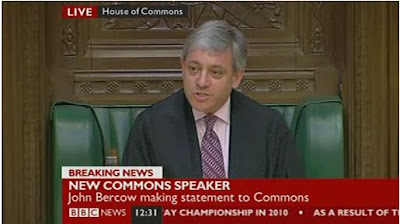 John Bercow the 157th Speaker of the House of Commons presided over his first PMQs today which once again were dominated by public spending.

David Cameron strongly criticised the Prime Minister’s statements on public spending and claimed the PM has been "caught absolutely red-handed" and calls on him to apologise for the misleading spending claims. Nick Clegg voiced a similar attack on the government, he stated “Just as the government was wrong on Ghurkhas, MPs' expenses and the Iraq inquiry, it is "wrong too" on public spending, he continued "The only gear left for this government seems to be reverse, when will we hear from him that he is wrong on public spending?"

The PM appeared to back track on claims made capital expenditure would continue to rise up to the Olympics, instead he said spending had been brought forward."I have explained to the House that money has been brought forward to 2009-10. Instead of having expenditure of just £20bn in 2008-9, it is £38bn. Instead of less in 2009-10 its £44bn. "We took the decision to advance public expenditure to deal with the recession," he said, but acknowledged that there after spending would fall. A clear victory for both opposition parties today in PMQs and a shaky performance from the Prime Minister.

The new Speaker made a short statement following PMQs in a clear attempt to stamp his authority on the position, in which he stated: "When Ministers have key policy statements to make the House must be the first to hear them, and they should not be released beforehand."In statements I ask that frontbenchers stick to their allotted time...backbenchers confine themselves to one brief supplementary". He added that "those speaking in the chamber should be heard, so an atmosphere of calm, reasoned order may be retained".

Posted by PSA Communications at 16:58 No comments: