The main focus of today's session was of course, defence, given the PM's recent testistomy at the Chilcot Inquiry. Cameron kicked off with, "Yesterday we had the inquest of four soldiers killed in Afghanistan in 2008. At the time the defence minister, the member for Grantham and Stamford [Quentin Davies] linked their deaths to the commander's choice of vehicle." The PM repeated that Mr Davies had apologised for the remarks. Cameron continued his line of attack in claiming former service personnel have criticised the PM's perfomance at Chilcott.

Inevitably the PM rebuked Cameron's calls for integrity with jibes about Lord Ashcroft's role in the Conservative party. A confident and relaxed PM, even cracked a joke, when Cameron claimed the Tories won the Cold War, claiming that Cameron was "still at school at the time". 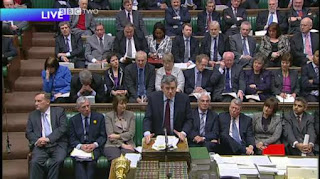 Clegg focused on prison policy, specifically re-offending rates, he said Labour had allowed prisons to become "colleges of crime", which are now costing the taxpayer £10bn each year.

Overall, Cameron's angry performance failed to land significant blows on the notably composed PM, perhaps the new confidence is a reflection of today's YouGov poll which showed a reduced 4 point lead for the Tories.

In other news, the budget was finally confirmed today and as expected will take place on 24th March which should once and for all silence speculation of an early general election.
Posted by PSA Communications at 15:07 No comments: