A New Era of British Politics 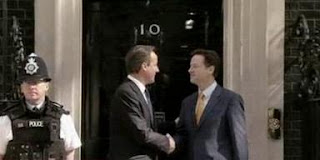 David Cameron has finally reached the door of No.10, in his first speech as Prime Minister he confirmed that a formal coalition with Liberal Democrats would be established, it has now emerged that the Lib Dems are likely to have five seats in cabinet and Nick Clegg has been confirmed as Deputy Prime Minister this morning.

Nick Clegg confirmed early this morning that his parliamentary party and the Federal Executive Committee has overwhelmingly endorsed entering into a coalition government, Clegg attempted to allay fears within Lib Dem circles that swathes of their core vote may desert them, looking straight into camera he said, "I want to assure you that I wouldn't have entered into this agreement unless I was genuinely convinced that it offers a unique opportunity to deliver the kind of changes that you and I believe in."

Now the drama of the last six days has finally reached a conclusion, it is  time to understand how parliament and government will work in these extraordinary circumstances, some immediate points of interest below:

The musical chairs will make for a fascinating first prime minister's questions, which feasibly might not be held until June 9 but could be the week before. Convention dictates that the second set of questions at PMQs - the permanent chance to hold the prime minister to account - is handed to the second largest opposition party.

The DUP - currently leaderless at Westminster after Peter Robinson lost his East Belfast seat last week - is in pole position with eight seats. The decision on whether this convention should continue would ultimately be the Speaker's, but expect some sort of row to break out here.

How opposition days are organised remains also remains a question to be answered, while the organisation of votes and whipping will make for a delicate arrangement. They may also have to strike some sort of deal on the election of the three deputy speakers who, for the first time, will be elected on the single transferable vote system.

Expect a lot of bartering on the composition of select committees. According to standing orders, a new edition of which has already been published, this has to be settled on within two weeks of the state opening, but their likely make up would also be altered under a coalition.

More details on the full cabinet to follow...
Posted by PSA Communications at 13:44