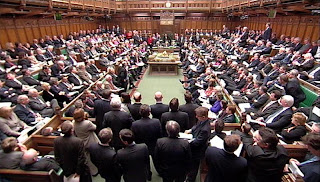 Once again, the Prime Minister was absent from the House of Commons for the weekly session of PMQs.

The PM is on a whirlwind international tour to the US and South America, trying to build momentum for his global economic stimulus plan, before hosting the G20 summit in London next week.

Harriet Harman stepped up to replace the PM, she looked shaky over the alledged disagreement between No.10 and the Bank of England. Hague failed to fully exmploit this, whereas Vince Cable probably stole the show, he suggested that Mervyn King had taken control of fiscal policy and said it was "a very British coup d'etat" with King "putting the government under house arrest".

Posted by PSA Communications at 13:39